During the 2nd-4th February the first Blockchain Hackathon in Stuttgart takes place. What started in summer 2017 as a small idea from blockchain enthusiasts rapidly and constantly grows into a thrilling project which finds widespread support within the regional hacker community and the established economy.

Bitcoin and blockchain technology is a global success story. What began with Satoshi Nakamotos Whitepaper in 2008 has inspired many people worldwide to innovate and build new digital infrastructures. From crypto currencies to smart contracts on public blockchains to a new way of project funding via initial coin offerings (ICO) – the blockchain technology has a big impact already. We believe this impact will grow even stronger in the years to come. As the blockchain community in the Stuttgart Region we also believe that blockchain technology is here to stay. With our first blockchain hackathon we want to bring people together to think about the blockchain future in combination with IoT. Since our region is globally one of the leading high-tech manufacturing, we are especially interested to combine blockchain and the internet of things. In doing so we intend to strengthen our community, expand our network to established companies and spark new ideas and innovation.

The flame as a symbol of progress 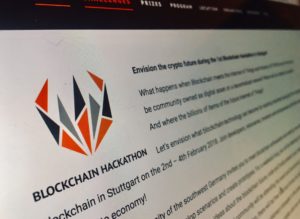 Our design and logo are inspired by the ancient Greek mythology figure Prometheus. According to legend Prometheus once stole the fire from the gods and brought it to the humans as an act that should enable progress and civilization. For us blockchain technology can be seen as a new fire that will support progress in development for both technology and civilization. While the hackathon logo symbolizes the Prometheus flame in an abstract manner, a more real representation can be found as picture on our website.

We first talked about the idea to organize a blockchain hackathon in the summer of 2017. What would it take to do so? Would we find adequate sponsors? Would we find enough people to participate? Now, half a year later, all our questions are answered. bwcon , the leading network of high-tech companies in Baden-Württemberg, provides the necessary support with an experienced project team who has already promoted and organized many hackathons in the regions. Members of the special interest group blockchain of bwcon put in additional effort in terms of event content, technical aspects and finding and serving our sponsors. The event is also supported by blockLAB Stuttgart – a non-profit organization of blockchain experts and enthusiasts – and many more.

At the Blockchain Hackathon we pay attention that there will be an inspriring atmosphere for knowledge exchange and networking. Therefore you will have the chance to connect with representors of our sponsors and supporters in person.

There is good reason to be excited! We are looking forward working with all participants on the future of crypto economy. Stay tuned!

Introduction to the Ethereum blockchain